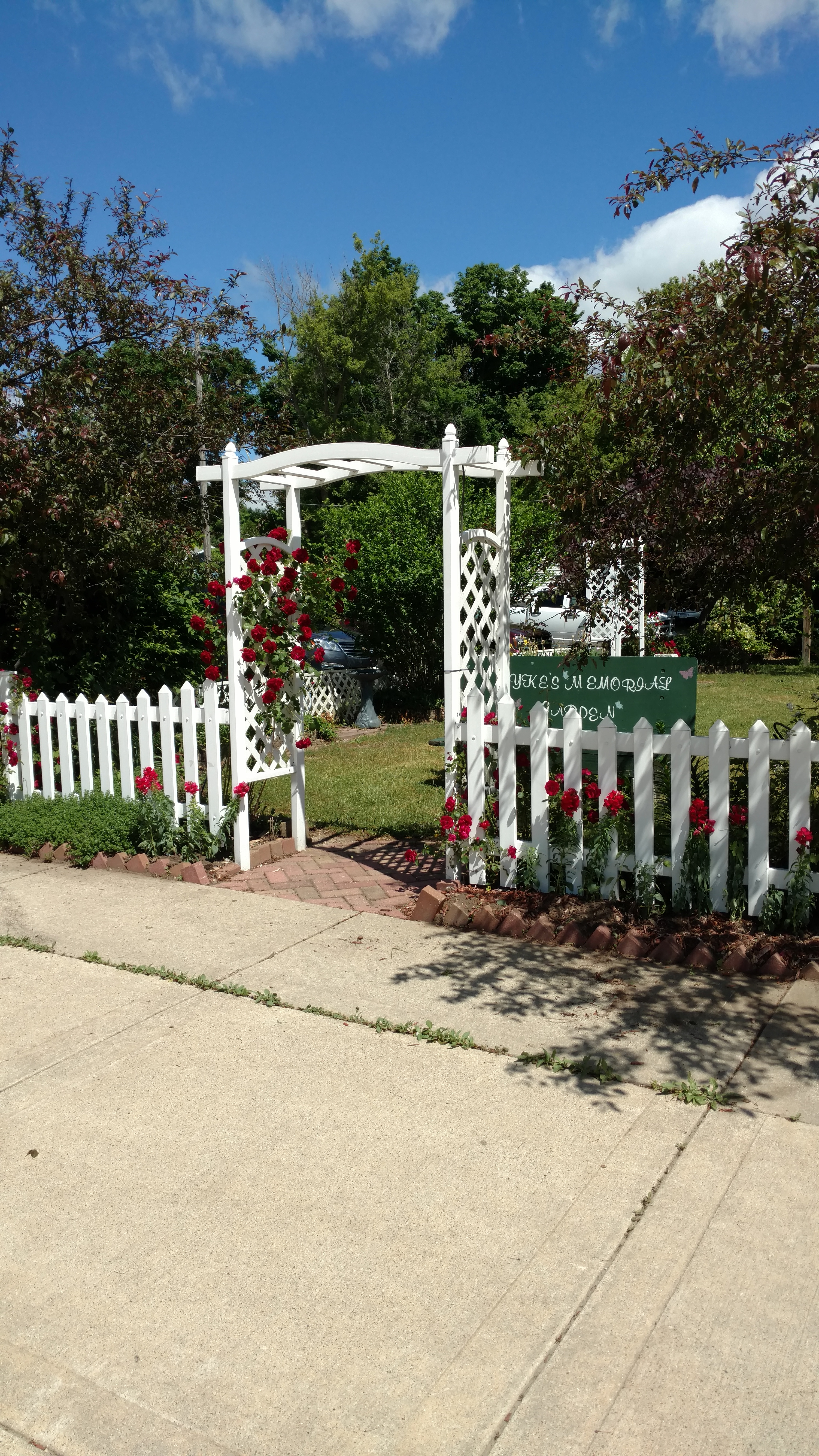 Sykes Park was named after Lester Sykes who owned the building and business on the site. After his service duty, Lester opened a Radio Repair Shop in 1950, after a period of study and schooling in Chicago.  In 1951 the first TVs came to the area and Lester moved to the building previously occupied by the Baptist Church where Sykes Park is today.  There, for many years, Lester fixed everyone’s radios and TVs.

After Lester’s death, his wife, Virginia (Ginny), had the building torn down and began to build Sykes Memorial Park. At that time, a garden club was formed and they helped to begin the planting.  The public was invited to plant a tree, or a flower, or put something in the park in memory of a loved one.  Many of the trees and plants there today were put there in memory of some of our former citizens. A pine tree was added in the back of the Park and served as the Village Christmas Tree which was lit every year for many years in a tree lighting ceremony.

As the Garden Club disbanded, Ms. Sykes found the park to be too much to take care of and in 1999 she deeded the property to the Village. With help from loyal citizens, the Park has been maintained since that time, with special thanks to those who have assisted in keeping it presentable.  An addition of a small pavilion with a picnic table was added by Joey Schmidt as an Eagle Scout project.  The drinking fountain was donated to the Park by then Police Chief, Mike Speese.

The addition to the Park between the existing Park and the Bank was deeded to the Village in 2016 from the Estate of Tom McClure. The Village hopes to extend this portion in memory of the McClure family. 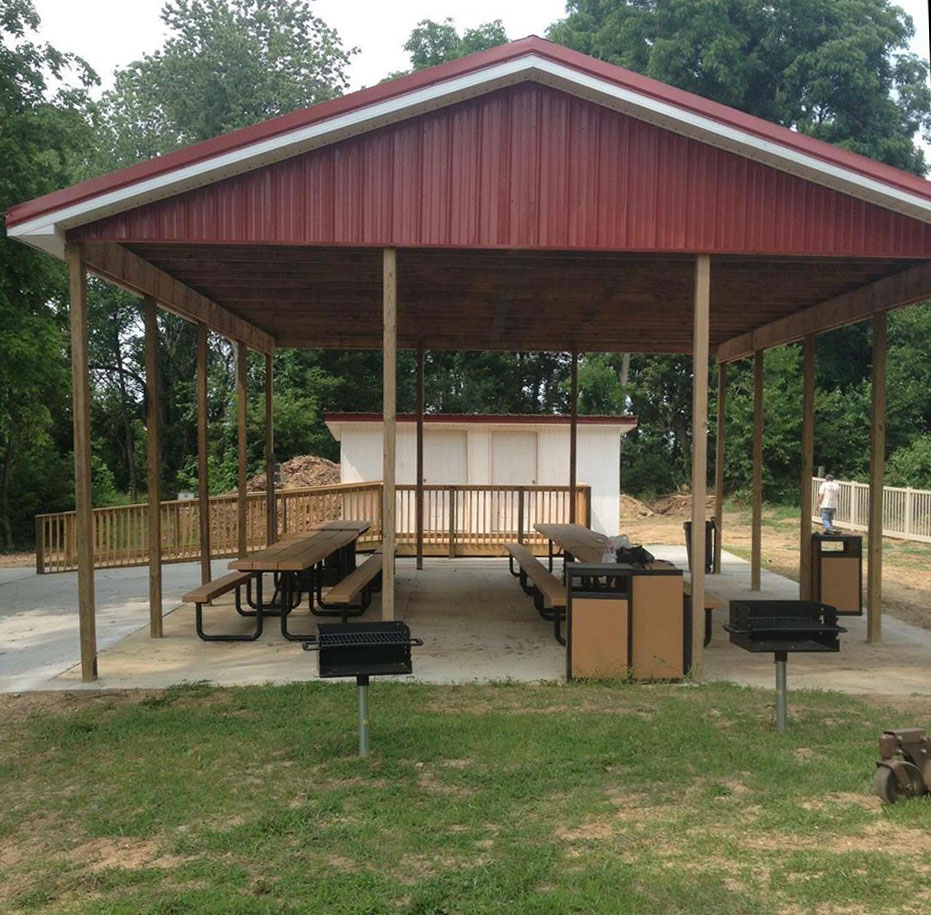 In May, 2010, the Village was notified that the 4.4 acreage and mobile home at the end of Jac Ct., which adjoined Village Property, would be going up for sale. As this property was once the home of a prior Springport Village Manager who passed away tragically in an auto accident, the Council opted to purchase the property and was in hopes to be able to build a park as somewhat of a tribute to his memory.  The Village purchased for the property in June 2010 for a nominal amount.

And so, it began. Committees were formed – the property was traversed to see what was there.  They found a pond that once had a fountain, there were berries, woods, flowers, bird houses, terraces, and a mobile home.  The first action was the removal of the mobile home, which was put up for bid and removed, leaving an add-on room which then became the public restrooms.

Volunteers then began clearing the property, hauling brush, cutting trees, and clearing for trails that would eventually become walking trails.

A grant was found from the DNR, applied for, and granted in the amount of $11,200. This was one of the very first DNR grants approved.  This grant would pay for the material for the pavilion, picnic tables, grills, benches, drinking fountain, material for restrooms, etc.  Donations of money, labor, and equipment began to come in from the FFA, the VFW, the American Legion, Springport Township, Boy Scouts, Construction Companies, and many, many private individuals.  So now it was time for purchasing of materials, and the Village found that almost all of the companies were willing to discount materials and services so that our money stretched.

The Pavilion material was delivered and through the donation of hours and hours of time and equipment, it was finished in 2012. An Eagle Scout project also completed a small picnic area east of the pavilion, which also included a grill.  Cub scouts built bird houses for placement on the property to replace those that were old.  Someone donated a swing set with a slide and that was put up for the children to play on.  Another Eagle Scout project built a small pavilion with a picnic table up at the top of the walking trail. Yet another Eagle Scout project relined the pond.  The park was fast becoming a community place.

More recently the decision was made to remove the pond. The bridge was realigned and blue flowers depicting water were planted on both sides of the bridge.

A hard walking surface was put down on the walking trails in 2015 by our DPW department. This really makes our trails good for walking and is enjoyed by many.  Residents cleaning out their flower beds have taken some plants there and planted them randomly along the trails, which makes the walk much more pleasant.  We welcome everyone to plant their extra flowers in the Park.

A second grant was requested in 2013, but by then they had become very popular with other cities and villages, and we did not qualify. Not to be stopped (we needed playground equipment!) thankfully donations continued so we purchased two “spring” toys.  We now had a swing set and two riding toys.  The chance came to sell our building which housed the Clarence and Springport Township fire department.  This was unexpected income so we were finally able to purchase a commercial grade playset complete with slides, climbing walls, and all sorts of bells and whistles.  This was installed, complete with ground protection in case of falls.  But, alas, no swings.  We were able to eke enough money out to purchase a commercial swing set, installed by our DPW, and completed with the ground cover to prevent injury.

The Community Park use continues to grow. Easter Egg Hunts are held each Spring, Scout “bridge” crossovers take place in the park, birthday parties and reunions are celebrated, families go for picnics and grilling out on the charcoal grills, and people love to walk the paved trails.

There are no specific companies, names, etc., in this review but you all know who you are and the Village is extremely thankful for all that has been done by those of you who have given so much.